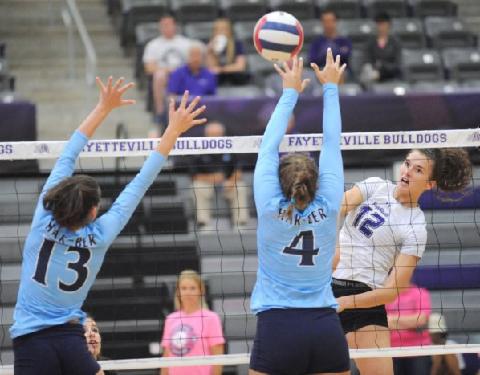 The Lady Bulldogs (25-6, 11-1 7A-West) started strong in the first set with tough defense and continued throughout the night with powerful scoring throughout the lineup. The final result was a convincing 25-14, 25-17, 25-15 sweep of Springdale Har-Ber as the Lady Bulldogs pulled even with the Lady Wildcats in the 7A-West standings.

Fayetteville sits in prime position to grab the top seed for the Class 7A state tournament, as its sweep of Har-Ber wins the tiebreaker over the Lady Wildcats' previous five-set victory at home earlier this season.

Olivia Wales of Fayetteville celebrates after winning a point against Har-Ber on Tuesday at Fayetteville High School. (By: Andy Shupe) (Credit: NWA Democrat-Gazette)

"We got a lot of good production from a lot of players and we were able to spread that ball around. I think that makes us a pretty difficult team to beat. Har-Ber is a great team, so moving into the final couple of weeks we feel good about how we're playing and we want to build on this momentum."

Haley Warner recorded five kills in the first set and Fayetteville forced Har-Ber (28-4, 11-1) into several return errors with imposing defense at the net, using a 14-4 run to take command.

In the second set, senior blocker Faith Waitsman set the tone for the Lady Purple'Dogs with a personal rally that helped put the match away for good.

Waitsman reeled off a flurry of kills as Fayetteville built a 13-7 lead, then helped close out a 25-17 win with her defense and sweeping shots to put the Lady'Dogs up 2-0.

"She works so hard on the floor for us to be an option," Phelan said. "The other part of that is we passed the ball really well to get Faith the ball, and our defense put up good balls where we could put the ball up in the middle."

Har-Ber never made a serious threat, dropping the third set 25-15.

"I think we just didn't play well at all," Lady Wildcats coach Shyra Schisler said. "We didn't play the way we needed to and we didn't play Har-Ber volleyball."

Ella May Powell had 32 assists and 12 digs and Waitsman finished with 13 kills and four blocks for Fayetteville. Warned added 14 kills, Abbie Kathol finished with eight kills and Olivia Wales contributed 12 digs for the Lady'Dogs.